The Hatchet Resort derived its name from the Hatchet Cattle Ranch, which was originally made up of five homesteads. The ranch was named the Hatchet because the original homesteaders, who put down roots in the area during the late 1800s and early 1900s, used a hatchet brand on their cattle.

The original 800-acre Hatchet property begins at the cattle guard on the highway near the resort and extends for two miles on both sides of the road toward the Teton Range. It is surrounded by national forest. In 1950, the ranch was purchased by W.B. Campbell, a Kansas oil man. Upon completion of the nearby highway through his ranch, Campbell built the Hatchet Motel in 1954 with lodge pole pine logs taken from the nearby national forest.

After being sold to other parties throughout the years, the Hatchet’s final fate was decided on November 17, 1998, in the most dangerous of forums – a public bankruptcy auction. In direct competition with a developer, the current resort owners partnered with the Jackson Hole Land Trust to purchase the resort and an adjacent 30-acre meadow.

This partnership permanently protected important wildlife habitat and the scenic integrity of the site while allowing resort operations to continue on seven acres. The Hatchet Resort project shines as an example in which an appropriate balance was struck between development and conservation – where the two truly complement one another.

Born near Philadelphia in 1862, Jack Shive enlisted in the army in New York at age 24. John “Jack” Shive was discharged from his army post at Fort Yellowstone in 1889. He traveled south to Jackson Hole and claimed a 160acre homestead on the Buffalo Fork by squatter’s rights. This land had never been owned by anyone before. Squatting tended to be a long process and Jack didn’t receive his patent until 1908, 17 years later. The document was signed by Theodore Roosevelt himself. John Cherry also homesteaded 160 acres in the region and the two men dug a mile-long irrigation canal to water their land.

Lucy married Jack in 1897. This would be Lucy’s third marriage, having divorced her two previous husbands. She was four years his senior.  She had one daughter from her second marriage, Carrie Nesbitt, who later joined her mother in Jackson Hole. Carrie immediately loved her stepfather, affectionately calling him “Daddy Shive.” 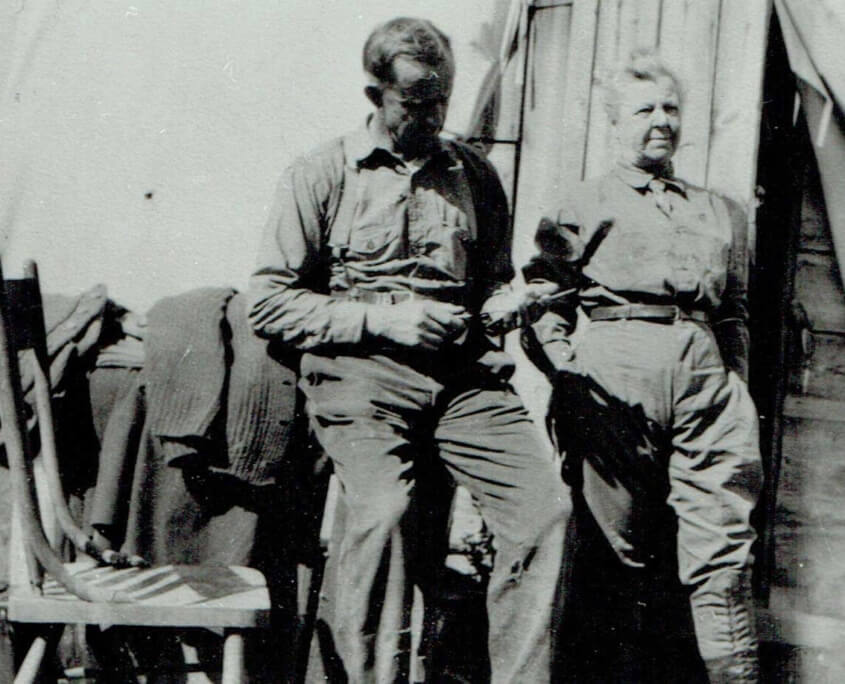 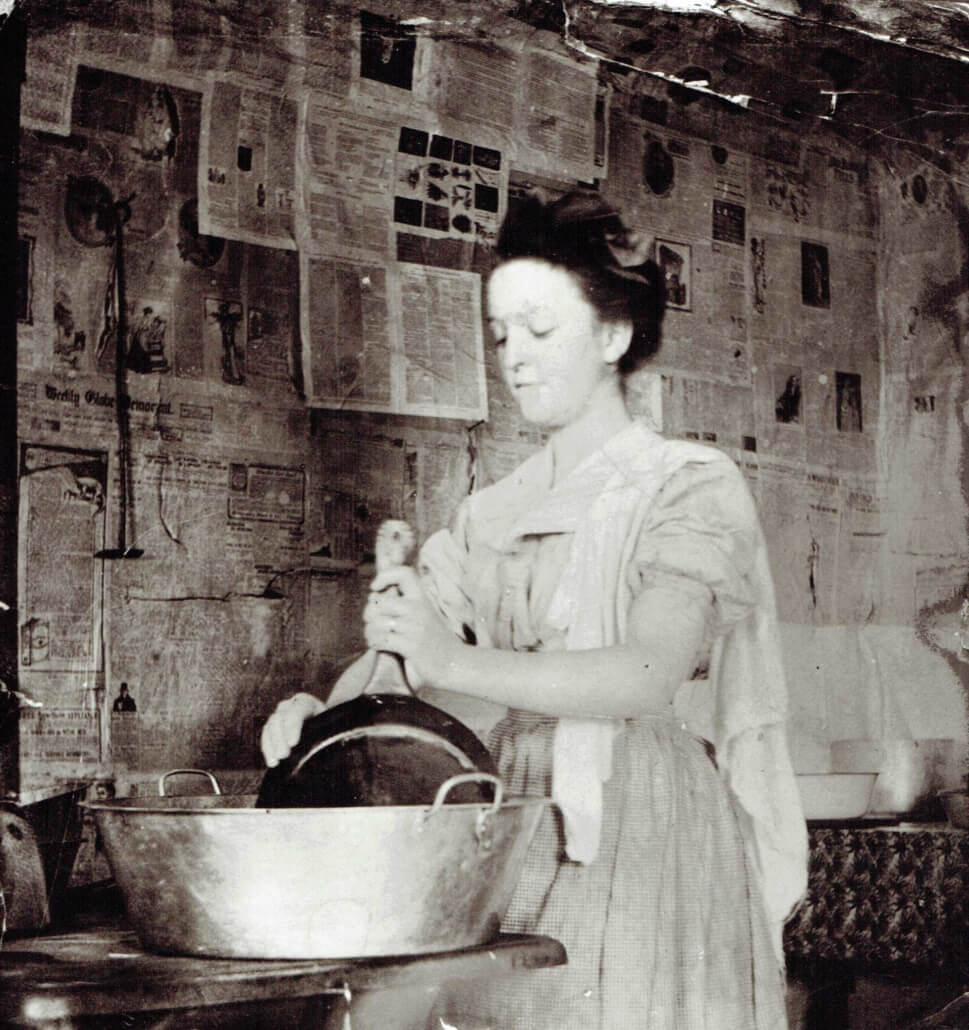 Carrie was Lucy’s daughter by another marriage. 10 years old at time of Lucy’s marriage to Shive.

Carrie lived in her homestead with her three children (Bill and Frances, twins; and Rutherford). William Dunn later built two homes for the family on the knoll or hill above the hay meadow. Called the Big House and the Little House. Little house still remains.

Upon her arrival on the ranch, Jack gave Carrie a new banjo and a gentle mare named Topsy. She was “delirious with the joy of her possessions.”

This photo shows the use of magazines as wall paper in their cabin. Every spring Lucy would paper the walls of the house with newspaper and magazine pages. Carrie would have preferred to read the articles first, but her mother found no use learning through reading and did not stop to skim the pages before putting them up.

The garden was enclosed by a fence made of elk horn that was “hilariously and laboriously gathered” by Lucy Carrie. All the buildings had sod roofs. In the spring they were green with foxtail. 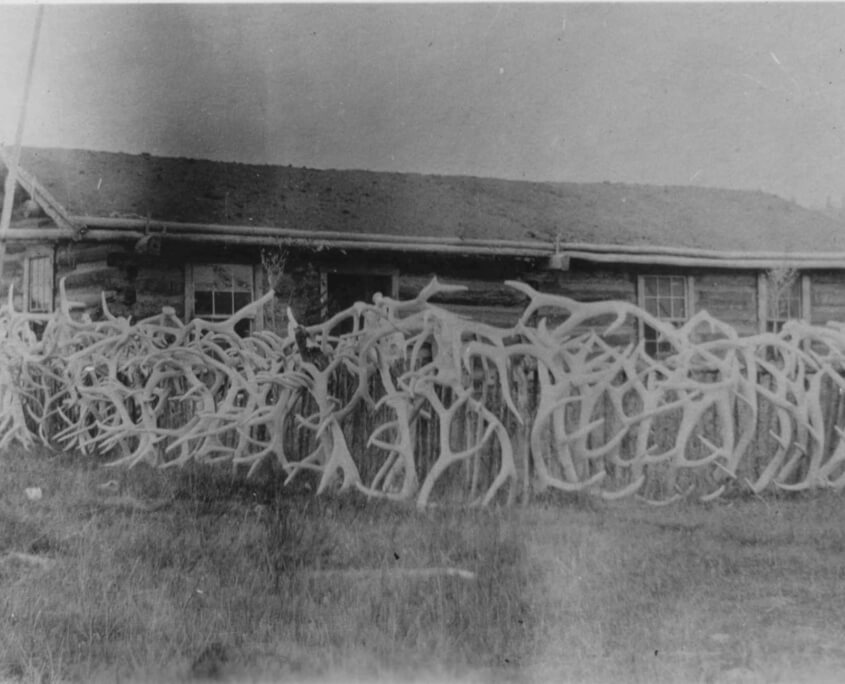 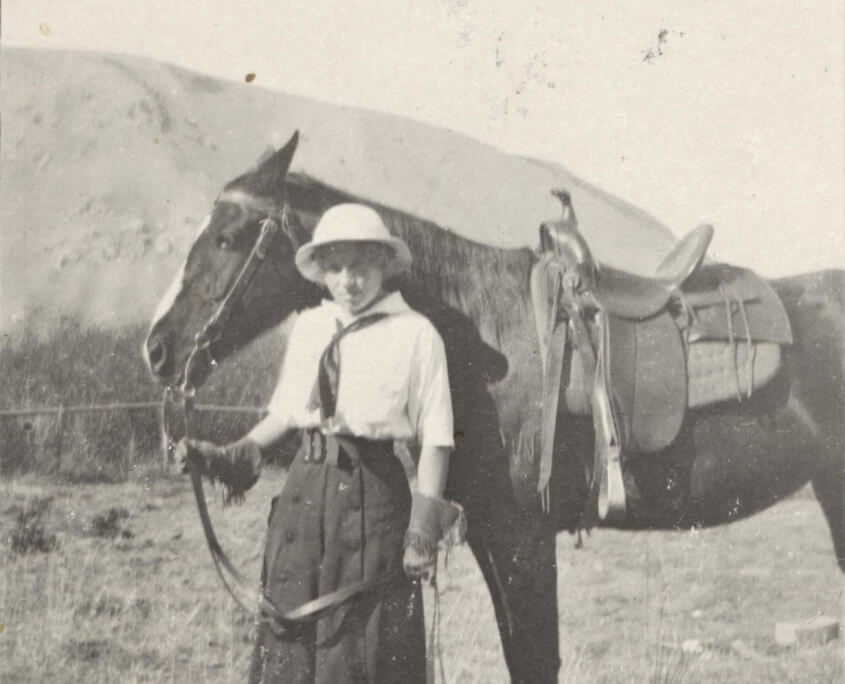 “In the spring and early summer when the river ran high, part of it eddied into an old slough trough, forming a lovely basin of gray mud. Once we children decided to surprise Maw by rolling naked the slime. We caked our bodies from chin to heel and then marched to the cabin, where Maw stood in the open doorway, one hand shading her milky eyes, her lips moving silently over her thoughts. When the three of us came into focus, her mouth gaped round like a gopher hole and she slapped her skirts in delight. “Tarnation! Well I do… Tarnation!” And she allowed us to stand around in the sun until the mud dried and caked and cracked, making our bodies pull and itch. What fun it was!” – Second Life by Frances Dunn Judge

Many a mountain were summited – including Grand Teton

Jack Shive was a Dutchman standing over six feet tall. In 1898 Shive (center) was part of the first documented summit of the Grand Teton with Franklin Spalding, William Owen and Frank Peterson. The group finds the famous Owen-Spalding route. Owen took a photo of Jack Shive, Spalding, and Petersen standing at the summit of the mountain, all wearing ordinary leather boots and jeans, and even the hats they would have worn for haying.  The men left their names chiseled in the summit boulder. (9) Dispute continues today as to whether the Owen-Spalding group had the first or second ascent.

Jack Shive did not care whether or not he was among the first to climb the Grand Teton, but he did care about the experience of the climb. It held so much meaning for him that he requested his ashes to be scattered on that great mountain after his death.

When Jack and Lucy sold their ranch in 1919, it covered nearly 800 acres. They retired on a small place near Blackfoot, Idaho, where they lived until their deaths. Lucy is buried with her daughter, Carrie, in the Blackfoot cemetery. And when Jack died, his request was carried out. His ashes were scattered from an airplane over the mountain of his great adventure, the Grand Teton.

We at the Hatchet Resort are all very proud of our history.  We are truly privileged to work in a location with such history.  The values of those who have gone before us are reflected every day, in the warm relationships we get to make with each guest.  We love this place and focus on preserving it for others and we hope you will come see for yourself. 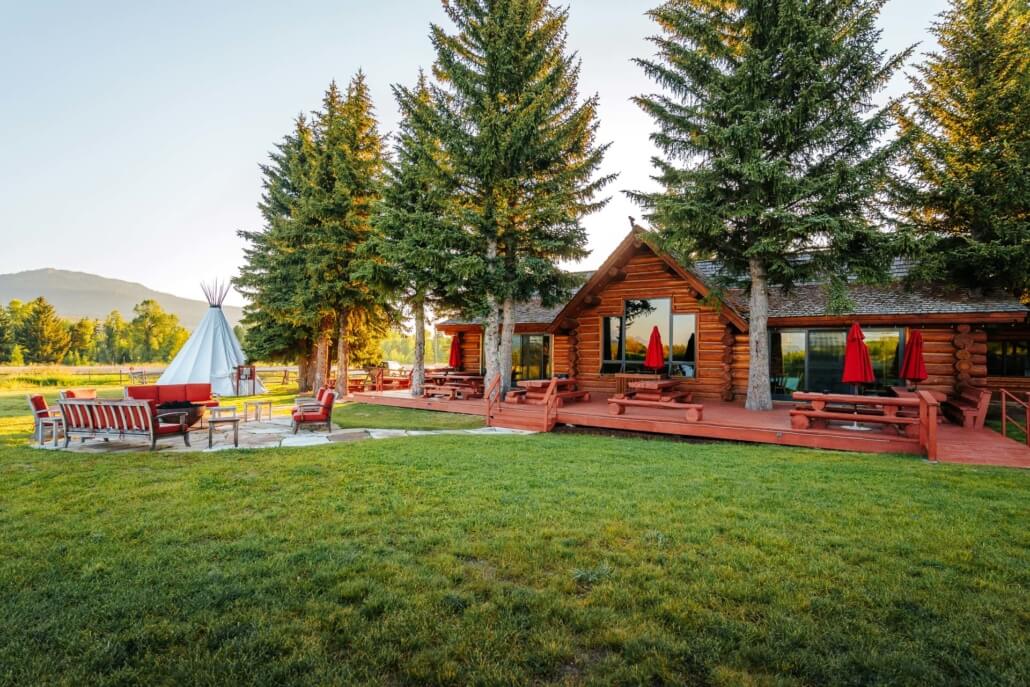 Steve & I just wanted to say THANK YOU for such a wonderful wedding weekend! The Hatchet was the perfect place for the celebration, and we are so glad we chose it. The sunset was gorgeous, and the photo booth in the teepee was great!

The food was excellent and the accommodations were very western, which is what the trip was called, “a Western Adventure!”
The beds were comfortable and the rooms were clean. Everyone loved the gift shop and the staff was very friendly.
No one missed the air-conditioning! Thanks for a fun experience.

Our stay in late fall at the Hatchet was true magic. Wild animals, epic hikes, trees ablaze with color, and of course the park.
Do not miss breakfast or dinner – and of course rest easy knowing you will rest, easy.

It is great and unique places like the Hatchet Resort that make my tours standout!
I really love the place and the location too!

It is great and unique places like the Hatchet Resort that make my tours standout!

I really love the place and the location too!

Our stay at the Hatchet Resort was wonderful – everyone was so nice to us, we really felt welcome and valued and will refer you openly.

We had a great time! And, it was nice meeting you and the rest of the staff we got to know. We’ll hopefully do it again in the near future.

Our stay at Hatchet was one for the record books, and our accommodations were first class. I am already planning on coming back with Gretchen next summer, and also have my daughter and grandkids join us.

My husband and I recently stayed at the Hatchet Resort and really enjoyed our time there. We liked our cabin so much, we wrote about your lovely place in our travel blog post about Yellowstone and Grand Teton.

Thank you soooo much. We had the best times of our lives. You were all amazing, organized, friendly, fun, and fantastic. Truly a dream come true for Wes and me!

Thanks for bringing your A-game to give Meghan and Wes’ guests a beautiful day to remember. It was a treat to work with each of you! If there’s anything else I can do to help, please let me know. 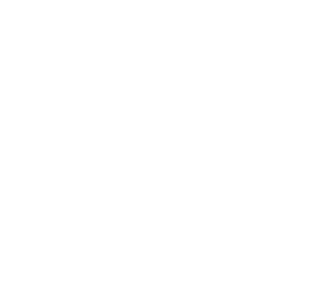